We are thrilled to announce the release of gnomAD v3, a catalog containing 602M SNVs and 105M indels based on the whole-genome sequencing of 71,702 samples mapped to the GRCh38 build of the human reference genome. By increasing the number of whole genomes almost 5-fold from gnomAD v2.1, this release represents a massive leap in analysis power for anyone interested in non-coding regions of the genome or in coding regions poorly captured by exome sequencing.

In addition, gnomAD v3 adds new diversity – for instance, by almost doubling the number of African-American samples we had in gnomAD v2 (exomes and genomes combined), and also including our first set of allele frequencies for the Amish population.

Here’s the population breakdown in this release:

In this blog post we wanted to lay out how we generated this new data set, specifically:

But first we’d like to say thanks to the many, many people who made this release possible. First, the 141 members of the gnomAD consortium – principal investigators from around the world who have generously shared their exome and genome data with the gnomAD team and the scientific community. Their commitment to open and collaborative science is at the core of gnomAD; this resource would not exist without them. And of course, we would like to thank the hundreds of thousands of research participants whose data are included in gnomAD for their dedication to science.

The Broad Institute’s Genomics Platform sequenced over 80% of the genomes of this gnomAD release. We thank them for this important contribution to gnomAD, and for storage and computing resources essential to the project. The Broad’s Data Sciences Platform also played a crucial role – the Data Gen team for producing the uniform gvcfs required for joint calling, and Eric Banks and Laura Gauthier for their work on the immense callset that forms the core of gnomAD. We also owe an enormous debt of gratitude to the Hail team, especially Chris Vittal, for creating the novel gvcf combiner described below; a callset of this scale would have been impossible without his engineering.

Konrad Karczewski, Laura Gauthier, Grace Tiao and Mike Wilson made absolutely critical contributions to the quality control and analysis process. In addition, the Broad’s Office of Research Subject Protection were key contributors to the management of gnomAD’s regulatory compliance.

The amazing gnomAD browser is the creation of Nick Watts and Matt Solomonson, and there was considerable work required for this version to scale to the size of this dataset and move all of our annotations onto GRCh38. And finally, we wanted to thank Jessica Alföldi, who has contributed in myriad ways to the development of this resource, including a critical role in communicating with principal investigators, assembling the sample list, and gathering the permissions required for this release to be possible.

Calling short variants in tens of thousands of genomes

A major challenge we had to overcome when putting together gnomAD v3 was how to handle the massive increase in data from gnomAD v2. Getting to the point of having over 70,000 releasable samples actually required making a call set that spanned nearly 150,000, from which we removed samples that failed our various quality filters, were related to other samples, belonged to individuals with pediatric disease or their first-degree relatives, or didn’t have appropriate permissions for data release.

Our previous strategy for gnomAD v2 involved joint-calling all samples together using GenomicsDB and GATK GenotypeGVCFs  to produce a VCF file with a genotype for each sample at every position where at least one sample contains a non-reference allele. This approach required too much time and memory to run reliably without errors or failures when using the number of samples present in gnomAD v3. Even if it had scaled, the output would have been a dense, multi-sample VCF for all 150,000 samples, which would have been about 900TB in size and prohibitively expensive to store and compute over.

Instead, Chris Vittal and Cotton Seed in the Hail team took on the challenge of ingesting the samples’ genomic VCFs (GVCFs) directly in Hail in order to expose all samples’ genotypes together for our analyses. GVCFs are generated for each sample separately and they contain one row for each genomic position where a non-reference allele was found in the sample and, unlike VCFs, a row for each reference block start. Reference blocks are contiguous bases where the sample is homozygous reference within certain confidence boundaries. In our case, we used the following three confidence bins:

For each of these bins, the reference block stores the minimum and median coverage, and the minimum genotype quality for the bases comprised in the block.

One of the major challenges in putting these data together is to align the non-reference genotypes and the reference blocks from the different samples for each chromosome/position. This was achieved by computing an efficient partitioning of the genomes that can be used for all samples and by combining the GVCFs using a tree approach.

The resulting data is a matrix of genomic positions and samples, where a row is present for each position where either a sample is non-reference or a reference block starts in any sample. The information about reference genotypes is only present at the beginning of each reference block (which can spend thousands or even tens of thousands of bases), making the representation sparse.

Using this new sparse data format, gnomAD v3 only takes up 20TB (45x less than using the previous dense format!). This new format scales linearly with the number of samples and is lossless with respect to the input sample GVCFs, which has the following important implications:

The overall sample QC process we used for gnomAD v3 was similar to that of v2.1, with a few changes and improvements along the way. The main improvements are the use of normalized coverage on both X and Y in order to infer sample sex, and a new way of filering outliers based on QC metrics.

Our sample QC process can be summarized as:

We computed sample QC metrics using the Hail sample_qc module on all autosomal bi-allelic SNVs. We removed samples that were clear outliers for:

In addition, we removed all samples with a mean coverage <  18X.

Note that the finger pointing down from the males cluster is likely due to mosaic loss of Y in older males as it correlates with sample age.

Defining a high quality set of sites for QC

In order to perform relatedness and ancestry inference, we first selected a set of high quality QC sites as follows:

In total, we ended up with 94,148 high quality variants for relatedness and ancestry inference.

We used Hail pc_relate to compute relatedness, followed by Hail maximal_independent_set in order to select as many samples as possible, while still avoiding including any pairs of first and second degree relatives. When multiple samples could be selected, we kept the sample with the highest coverage.

We use principal components analysis (PCA, hwe_normalized_pca function in Hail) on our set of high quality variants to compute the first 10 PCs in our samples, excluding first and second degree relatives. We then train a random forest classifier using 17,906 samples with known ancestry, and 14,949 samples for which we had a population label from gnomAD v2, as training samples and using the PCs as features. We assigned ancestry to all samples for which the probability of that ancestry is > 90% according to the random forest model. All other samples were assigned the other ancestry (oth). 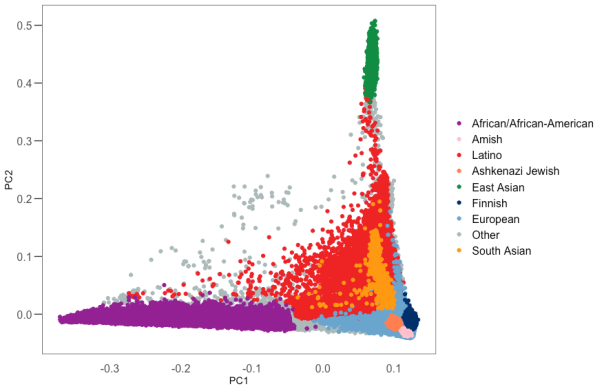 To illustrate the improvement from this new method, here is the n_snp metric distribution for the African ancestry samples using our previous and current approaches

We used the sample QC metrics computed using the Hail sample_qc module on all autosomal bi-allelic SNVs and filtered samples that were 4 median absolute deviations (MADs)  from the median for the following metrics: n_snp, r_ti_tv,r_insertion_deletion, n_insertion, n_deletion, r_het_hom_var, n_het, n_hom_var, n_transition and n_transversion. In addition, we also filtered out samples that were in excess of 8 MADs from the median number of singletons (n_singleton metric).

For this release, we computed all our variant QC metrics within Hail and because our new sparse format contains all the GVCFs information, we computed them for each allele separately. We then used the allele-specific version of GATK Variant Quality Score Recalibration (VQSR) to compute a confidence score for each allele in our data to be real or artifactual. We used the following features:

We assessed the results of the filtering by looking at the same quality metrics we used for the gnomAD v2 callset: de novo looking mutations in our 6,044 trios, Ti/Tv ratio, proportion singletons, proportion bi-allelic variants, variants in  ClinVar and precision and recall in two truth samples present in our data: NA12878 and a pseudo-diploid sample ( A mixture of DNA (est. 50.7% / 49.3%) from two haploid CHM cell lines) for which we have good truth data.

The figure below illustrates the performance of the approach we used (AS_VQSR_TS), compared to classical site-level VQSR (VQSR) and allele-specific VQSR trained without the transmitted singletons data (AS_VQSR) on NA12878.

In addition to VQSR, we also  applied the following hard filters: